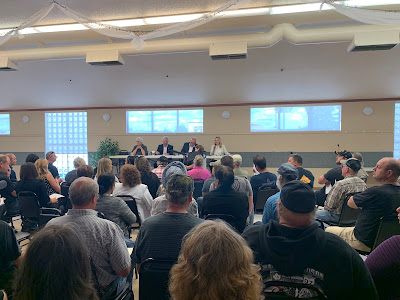 Yesterday from 11:30am to 1pm -- Almost 200 people packed the Quesnel Legion to discuss the current challenges facing BC's Forestry Sector - My Cariboo Now has a good take on the meeting here

The event was hosted by Cariboo-North MLA Coralee Oakes and she was part of a panel discussion including Fraser-Nicola MLA Jackie Tegart, Nechako Lakes MLA (and BC Liberals' Official Opposition Spokesman on Forestry) John Rustad and Cariboo-Prince George MP Todd Doherty

After brief speeches from MLA's Oakes, Tegart, Rustad and MP Doherty - the floor was turned over to attendees to express their ideas about the current challenges in the forestry sector and how to move forward...

The meeting was going well until Mayor Simpson address the 200 attendees and talked about what is occurring in Quesnel to help those impacted by the Tolko QuestWood mill closure... and that seemed to upset some in attendance as to a lack of sharing of information.... a point repeated by MP Doherty

No matter the level of government or political stripe - there simply must be cooperation on all levels to assist people when they lose their job by a major employer like Tolko, West Fraser, etc - a point repeated on Facebook by those attending yesterday's session.  Residents' don't care about what beefs elected officials have with each other - they expect governments, no matter what level or political party, to assist people with their needs, both short and long term.... when a major employer decides to close their doors....

Involved with local, provincial and federal politics and a Governance Geek. I am also the Cariboo Regional District Electoral Area 'D' Director
Twitter - https://twitter.com/sforseth000
Facebook (Personal):
https://www.facebook.com/steve.forseth.3
Facebook (CRD - Area 'D' Director):
https://www.facebook.com/pages/Steve-Forseth-CRD-Area-D-Director/530711320407846
Phone - 250-267-6725
Email - sforseth000@hotmail.com (Blog related or personal) or sforseth@cariboord.ca (CRD Business only)
** Please note that any blog posts here are not an official record or commentary of any Local Government or Board of Education in the Cariboo Chilcotin and you are advised to go to their respective websites for the official version of meeting minutes or relevant documents **