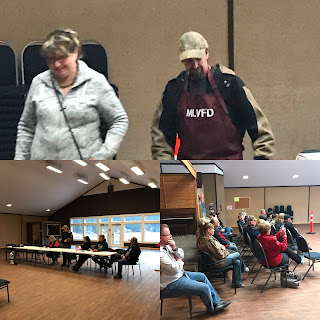 During the meeting, Ian Hicks (MLVFD President)gave an recap on the previous year activities including ongoing training, multiple grants,and consistent fundraising efforts have topped the coffers to more than double of what the MLVFD had at last year's AGM.

Special recognition was given to all of the donors in the last year. The MLVFD now has 12 directors plus 4 board members. Ian Hicks remains as President, Gordon McArthur remains as Vice President, Cori Gosselin remains as Treasurer, and Vicky Ortiz remains as Secretary.

Finally - a very touching scene where McLeese Lake resident Rhonda Kolcun presented the MLVFD with 5 cooking aprons. I am sure that the gents of the MLVFD will put them to good use during 2017

As I said on Facebook this evening -- As the CRD Area D Director - I'd like to thank the MLVFD Society Board for their extraordinary efforts this past year and since this journey from 2012, it is been fantastic to watch the progression of the local fire department in McLeese Lake and I look forward to their efforts being rewarded in future years.

Posted by Steve Forseth at 9:54 PM

Any Local/Provincial or Fed Gov't Issues/Concerns? Fill out the form and I'll get back to you ASAP

Involved with local, provincial and federal politics. I am also the Cariboo Regional District Electoral Area 'D' Director
Twitter - https://twitter.com/sforseth000
Facebook (Personal):
https://www.facebook.com/steve.forseth.3
Facebook (CRD - Area 'D' Director):
https://www.facebook.com/pages/Steve-Forseth-CRD-Area-D-Director/530711320407846
Phone - 250-267-6725
Email - sforseth000@hotmail.com (Blog related or personal) or sforseth@cariboord.ca (CRD Business only)
** Please note that any blog posts here are not an official record or commentary of any Local Government or Board of Education in the Cariboo Chilcotin and you are advised to go to their respective websites for the official version of meeting minutes or relevant documents **